For those unfamiliar with the history of the portrait, it was commissioned by Jane Austen’s great-uncle, Francis Austen, who also gifted Jane’s father with one of his livings, so he obviously took an interest in his nephew’s family. After Francis Austen’s death, his grandson gave the portrait to a neighbor who was a fan of the author, telling her it was a portrait of Jane Austen. After the neighbor’s death, the portrait was given to Jane’s great-nephew, the Rev. John Morland Rice, and the portrait has been kept in the Rice family ever since.

Members of the extended Austen family apparently considered it a portrait of Jane Austen. Lord Brabourne, another great-nephew, used the portrait as a frontispiece for his edition of Jane Austen’s letters, published in 1884. Interestingly, it was not used by Austen’s nephew, J.E. Austen-Leigh, when he published his Memoir of his aunt in 1869; instead, Austen-Leigh commissioned a painting based on the watercolor by Cassandra Austen. Did he and his sisters not know of the Rice portrait? Perhaps.

The late owner, Henry Rice, wished to sell the portrait so that he could distribute the money among his heirs. However, most Austen scholars agreed that it was not actually a portrait of Jane Austen, the author. Mr. Rice, undaunted, engaged with several well-known Austen scholars, who declared it could indeed be a portrait of Jane Austen, that Ozias Humphry was known to Francis Austen and that tween girls in Austen’s time wore such gowns.

The portrait was offered for sale at Christie’s in 2007, but the bidding failed to reach the reserve price–the minimum price that the owner would accept. Clearly the art world was wary of the painting’s provenance. The portrait remains with the Rice family, and they have been working very hard ever since to convince someone to pay big bucks for the painting. (Incidentally, Wikipedia has an even-handed and informative article about the painting; sadly, a lot of links from this blog at the time of the Christie’s sale have disappeared from the internet.)

So what’s the new news that is claimed to be absolute proof that the portrait is of Jane Austen? Apparently a letter was found, unsigned but thought to have been written by Austen’s great-niece Fanny Caroline Lefroy. The note purports to give the story as I’ve described it above: grandson gives it to rando neighbor, telling her it’s a portrait of Jane Austen by Zoffany, and rando neighbor’s stepson, many years later, gives it to the Rice family, claiming that it was a portrait of Jane Austen by Zoffany. In other words, it’s nothing new. That history was known. 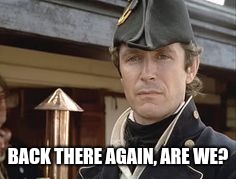 The problem is that the portrait, however good-naturedly, was originally passed on by someone who was two generations removed from its creation with at least some incorrect information (the identity of the painter). At another generation’s remove, the portrait was passed to the Rices with this same incorrect information. Anyone who has played the Telephone Game knows how things can become twisted as they are passed along. The argument is still whether the girl in the portrait is Jane Austen, and it is still not known–at least not enough for the people bidding on the portrait at Christie’s in 2007. So we’re right back where we started.

As Henry Tilney said, “If it is to be guess-work, let us all guess for ourselves.” Some say that the portrait is of Jane Austen. Some say it is not. We leave it to our Gentle Readers to make up their own minds.