Most of us have strong views about South Africa. Most of us know what South Africa under apartheid was like, if not firsthand, then from news reports, magazines, books, or other people. In Patrick Flanery’s wonderful debut novel, Absolution, set in the years before and after South Africa’s first free election in 1994, one character who knows the “ins and outs” of apartheid is celebrated novelist, Clare Wald.

Clare’s been living a comfortable life in Cape Town, but after a strange home invasion perpetrated by a mysterious gang who wanted neither Clare’s money nor her life, she’s moved to a compound in a very exclusive neighborhood, where high walls surround the garden, where there are “panic buttons” and metal window shields, and “barbed wire shaped and painted to mimic trained ivy.”

Into this fortress comes Sam Leroux. Sam is a native of South Africa, who went to New York in order to attend graduate school. While there, he married an American named Sarah. When Sarah’s journalistic ambitions take her to South Africa, Sam makes the decision to write the reclusive and ill-tempered (she declares herself “a terror” on page two) Clare’s biography. Her work will be of interest to others, Sam reasons, because she was writing during apartheid, and she learned how to adapt in order to keep herself and her family alive. “I came to know my molester as intimately as I knew my husband – perhaps more so,” she says.

Sam and Clare engage in a deceptive pas de deux, a danse macabre, so to speak. Sam is not quite what he seems, but then the stories Clare tells Sam are not quite the truth as well. Sam wants information from Clare; Clare wants Sam to absolve her of what she sees as “her sins.”

Ill-tempered though she is, Clare is haunted by ghosts. There’s the ghost of her father, a judge during apartheid, whose liberal ideas were too much for Clare and left her feeling as though she failed him; there’s Laura, Clare’s fiery daughter, a “journalist until she became wholly invested in the armed struggle,” a woman who resisted apartheid and supported others who also resisted, and who is presumed dead, a victim of her beliefs; and there is Nora, Clare’s sister, a woman who married into the right wing of South African politics and ended up a murder victim because of it. Here is Clare as she tries to explain the fundamental differences between Nora and herself:

Nora’s soil, the water she drank, the air she inhaled, it was all polluted. And while she and I grew up with the same conditions, more or less, I had a higher tolerance, natural immunities against the environment that tried so hard to twist our growth to its own malign purpose. But not Nora. She was always susceptible. She was weak.

Both Nora’s murder and Laura’s apparent death now seem to Clare to be senseless, and for some reason, she’s convinced she is somehow to blame for both. She barely bothers to go out anymore, and, she thinks, why should she? Her life is made up of the past, not the present, and the ghosts that haunt her are all she has. Thinking of Laura, Clare writes:

You are entirely within me now, voice echoing always, a million different voices, all you, borrowed from moments when I heard you as you wanted to be heard, moments you did not realize anyone was listening, perhaps in particular me. These are no substitute, they are all that I have, those million necromanced fragments of you, summoned around the pit of fire yawning between my ribs.

Clare has sentenced herself to this ghostly prison of her own making, preferring the company of her ghosts until death finally overtakes her. Nothing matters now but forgiveness – absolution – if absolution can ever be found. Her sections of the book are driven, not by the steely-spined writer who produced the bulk of her work during apartheid, but by a mother who loves and misses her daughter, a mother who wishes to “prostrate herself in the name of reconciliation and love.”

Right outside Clare’s window is her garden, of course, and Flanery uses the garden – the soil – as a metaphor for the emerging South Africa and the peaceful co-existence of “differences” in the same way Damon Galgut sometimes does. As Clare’s gardener, Adam, cultivates the soil, nourishing the new life planted in it, Clare’s words to him take on a deeper significance than simply which way is the best way to grow vegetables:

It’s not a bad thing. It is merely different. You will see. And if you are right, then I shall see. But you must let me grow what I want, Adam, otherwise we will only come to grief. . .give them a chance. See if they will flourish.

Sam has some ghosts of his own to exorcise including those of his own parents, who were killed in a car bombing, and his murdered guardian. And Sam has a much deeper connection to Clare than she’s aware of. Does Clare remember Sam? Maybe, for she toys with him and withholds information just to be cantankerous and to punish Sam for not asking the questions she prefers to answer. She really isn’t a nice person at all.

As for Sam, he barely recognizes the country of his birth, and he doesn’t seem to understand, at least at first, just how much danger lurks around every corner: Even the shortest journeys must be undertaken only by car; every visitor, every stranger must be treated with the utmost suspicion no matter how innocent he or she appears to be; and all homes and offices must be encased in several layers of security, just like Clare’s.

While Sam’s friend, Greg, tries to teach him the tricks of “keeping safe,” Sam’s wife, Sarah, takes a more pragmatic view toward the violence in her husband’s native country. After all, she says, she could be robbed at gunpoint in any country in the world. And that’s true, of course. And there are people who are masters of self-deception, as Clare is, in every country, just as the search for truth is universal and not specific to Sam or to Clare or to South Africa. The fact that it’s universal impulses rather than ones specific to South Africa that drive the main characters – Clare and Sam – forward, adds to the book rather than detracts from it. It connects “them” to “us.” 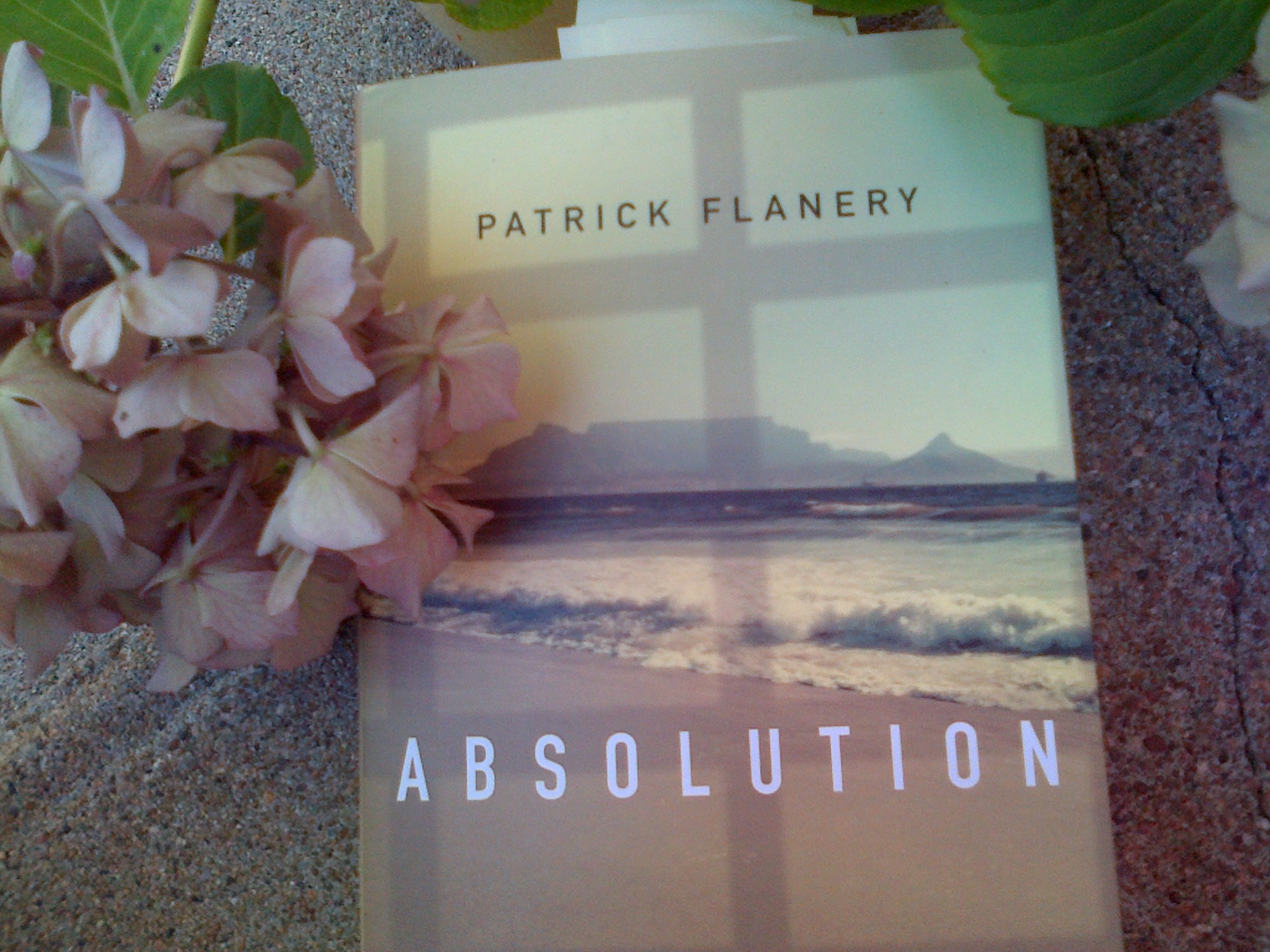 It’s the mystery of Laura’s disappearance that provides the main narrative thrust, however, but ultimately Absolution is a book that asks some very difficult moral questions while it explores the guilt the whites in South Africa must bear.

And, as the book swings back and forth between 80s apartheid, when liberal writers like Clare had to play a game of cat-and-mouse with the Board of Censors, to the “false face” of South Africa today, ostensibly a paradise of luxury hotels in which the “panic buttons” and the interracial mistrust remain hidden, the reader becomes more and more uncomfortable, right along with Sam, who comes to the realization that the history of his own life “keeps coming back like a chronic illness.”

Flanery tells his story in a braided plot of four strands, framed by a series of interviews. The chapters entitled “Sam” are those written by Sam, of course, and are told from his perspective. Then there are the chapters titled “Absolution,” which consist of a “fictionalised memoir” written by Clare about the break in of her home. “Clare” is a first person account of Wald’s attempts to make sense of Laura’s disappearance, and finally, “1989” which is told from Sam’s point-of-view begins at the point when Sam and Laura (yes, Laura, not Clare) meet for the very first time. I think Flanery did a wonderful job of weaving the story strands together and letting his readers know that things are seldom as they first appear to be. The author also keeps his readers from learning crucial information too quickly and spoiling the ending. And, as Sam probes Clare’s writing, political beliefs, and views on censorship, the reader comes to see that even in South Africa truth and reality are fluid and changeable.

The language of this novel is, for the most part, brilliant, though its crowning achievement has to be the character of Clare. She’s intelligent and educated, she’s cantankerous and superior, and she’s given to being rather dismissive of the pain of others: “We all know how people suffer over the unexpected violent death of a family member. . .It’s vivisection. . .It’s limb loss.” Of course, it’s much, much more than that, but anyone would be hard pressed to get Clare Wald to admit it, unless she’s speaking of her own ghosts and losses.

If Clare doesn’t seem like a very sympathetic character, well, in a conventional sense, she’s not. But she is rather like the heroine of Anne Enright’s Booker winning novel, The Gathering, or perhaps like the eponymous Olive Kitteridge. We understand her, and Flanery has endowed her with a measure of sympathy, something that could be said to be a miracle of writing in and of itself.

For me, the final pages felt just a little flat, but maybe that’s because I was expecting more. To his credit, Flanery resists the urge to tie up every loose end, to let the reader know all he might want to know. Truth, after all, is elusive and probably will never be fully known.

In the interviews that bookend the novel’s story, both Clare and Sam return to the metaphor of the soil. There is something personal both of them need to unearth, to lift from the ground “the long tail of the root, clinging to its earth of history.”

This is an intelligent book filled with intelligent characters. It’s a book that asks difficult moral questions for which there may never be any satisfactory answers. It’s a book, that like South Africa, itself, contains a beauty – and a horror – that’s truly overwhelming.

Recommended: To anyone who loves literary novels, novels that ask moral questions, or highly intelligent books filled with highly intelligent characters. Patrick Flanery’s only thirty-six; he’s an author to watch. I think this will end up being one of the best books of 2012, and Flanery, and American from Nebraska, recently acquired British citizenship, making his eligible for the Booker. Is Flanery on par with Coetzee and Galgut? It’s too soon to tell, and give him a chance, but I think he’s definitely headed in that direction. The cover art is okay, but I’m not sure that alone would induce me to pick the book up.